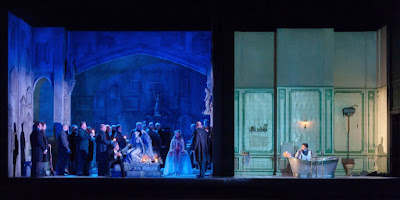 The renown of Donizetti’s Lucia di Lammermoor has long rested on a single moment, the mad scene in which Lucia emerges, covered in the blood of the man she has just murdered, and wanders among her wedding guests, singing tenderly of her impending marriage to her former lover. The music here is strikingly different to the rest of the opera: dramatically static and with a musical pace that incorporates moments of total suspension, it is dominated by a highly exposed and ornamented soprano line which, if it wasn’t already hard enough to sing by itself, also demands that the soloist effectively take full control of the orchestra and glory in her vocal talents at precisely the moment the character loses control of herself.

The scene’s exceptional quality is underscored by the (originally intended) use of a solo glass harmonica, an instrument whose other-worldly timbre was for Donizetti and his audience strongly associated with fragile femininity, mesmerism and madness (there is evidence that the instrument fell from favour in the nineteenth century because of fears that its players would go insane). Successful performances of the scene carry immense music-dramatic force, and numerous sopranos have made their careers from shining at this highly exposed moment. But the greater the success, the more pressing the question: what was it that drove Lucia mad?

In Walter Scott’s novel the causes are manifold – Lucy’s mother’s pathological social ambitions; her own obsession with romantic fiction; the apparitions of her murdered ancestress (the “bride of Lammermoor” of the title). The denouement possesses all the inexorability of a tragic fate. Opera commands its own kind of inexorability, of course, which more than makes up for the lack of recourse to narrative detail. But Lucia’s off-stage passage from tragic bride in the second act to deranged murderer in the third always retains something of its disjunctive force, smoothed over only by the fact that most in the audience are already keenly aware of what is about to happen.

A new Royal Opera staging, directed by Katie Mitchell and conducted by Daniel Oren, grapples with this issue in an unusual – and unusually interesting – way. Its success derives largely from a forcefully feminist interpretation of the piece in which the male characters are denied dramatic gravity. This extends even to Edgardo, Lucia’s secret lover and her brother’s sworn enemy. Lucia dresses as a man for their First Act tryst, and on hearing Edgardo’s confession that he must leave for France, she tears off his clothes, strips down to her billowing underwear and mounts him. The repeated pizzicato chords underpinning the soaring duet “Verrano a te sull’aure” (whose melody returns in fractured form during the mad scene) provide the rhythm.

When it comes to Arturo’s murder, the action (usually off-stage) is intentionally farcical: Lucia tempts Arturo into bed while Alisa hides with a cake knife. But the stab wound isn’t fatal; nor are subsequent attempts to bludgeon and shoot him: the stunned Arturo just keeps getting up again. The women eventually smother him with a pillow. It’s pure silent comedy slapstick, with an uncanny twist given that what we hear in the auditorium and see on the rest of the stage at this time is the “tower scene”, where Enrico challenges Edgardo to a duel – for much of the nineteenth century this represented the opera’s dramatic highpoint.

The tragedy comes moments later when Lucia loses her baby by Edgardo, a miscarriage brought on not by the “violence” of the murder, but by Lucia’s having strapped herself into a corset and crinoline for her wedding to Arturo. She returns to the stage for the mad scene, therefore, covered not in Arturo’s blood, but in her own, a victim not merely of the paraphernalia of patriarchal oppression but of her own failed attempt to take control of her own destiny.

Lucia’s death is not, then, only the “social tragedy” of an unstable young girl, but a tragedy in the full, heroic sense of the term. Mitchell’s cause is aided by Vicki Mortimer’s bifocal stage designs, in which the stage is often split into two halves, the action in each half happening independently of the other (hence Arturo’s murder during the Tower scene, or Lucia’s getting dressed during the opening hunting scene). It sounds distracting, but is really just an extension of techniques so common on opera stages as to be unremarkable. The sets themselves – Lucia’s green-tiled bathroom with its ominous tub placed front-centre; the eerie gothic splendour of the Lammermoor grounds – are superbly achieved, while the sometimes crowded details draw the relevant cultural narratives precisely and powerfully into the storytelling. When Enrico compels Lucia to marry Arturo, he asserts his power not merely by penetrating the private space of her boudoir, and even bathroom, but by removing her paintings, books, maps. While Scott’s Lucy is a romantic, whose vulnerability derives from the fact that she is divorced from political reality, Lucia is here herself represented as the danger, her literary interests conceived not in terms of escaping reality but in gaining power over it.

In this sense, Mitchell and Mortimer’s inspiration might well have come from the casting of the German soprano, Diana Damrau, in the title role. Damrau has performed the role all over the world, but her voice, while it has the gymnastic flexibility of a coloratura specialist, carries the weight and tonal depth of a dramatic soprano, much better suited to a depiction of the character as capable young woman than as helpless girl. And as Damrau demonstrates, her characterization renders the mad scene unforgettably potent.

Damrau’s performance is stunning throughout, and ably matched by Ludovic Tézier’s grandly toned Enrico and Charles Castronovo’s richly lyrical Edgardo. To Mitchell’s credit, both men play the roles straight. The chorus and orchestra also manage impressively to sustain the musical atmosphere, despite Oren’s lacklustre conducting. No surprises there; nor in the boos that greeted the production team on the first night.