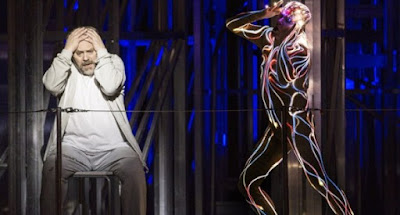 Elysium, a new opera by the Norwegian composer Rolf Wallin and the British librettist Mark Ravenhill, begins with one of family life’s most ordinary scenes. A mother is comforting her son, who has woken from a nightmare about monsters. The strings slide in eerie glissandi, with shimmering percussion. Mute rhythmic punches issue from the brass but don’t go anywhere. The boy wants to keep his light on and asks how many human beings there are in the world. As questions go, it is ordinary enough. Yet his mother’s answer is not. There are forty humans, she reminds him. The thousands of humans in the books are all from long ago. Just forty are left.

It gets stranger. The forty humans live on an island where they are kept alive by the “transhumans” who occupy the rest of the planet. Transhumans – the “monsters” of the little boy’s imagination – are peace-loving cyborgs, who live as long as they want, can buy new skin and organs when the old stuff wears out, and whose every desire is effortlessly met through the equipment of each with networked electronic implants. These allow the species of the future to forgo the vagaries of verbal communication, indeed of all representational media, in favour of direct emotional exchange. The flow of feeling can be heard in an elaborate weave of high-pitched melismatic lines, produced mostly by electronic instruments but with acoustic instruments sometimes integrated into the flow.

When the first transhuman we encounter meets the boy’s mother, they are drawn to each other by a desire to change places. The mother (sung by Lina Johnson) wants the material freedoms of the super-species; to escape her island prison and live out her dreams. The transhuman (sung by Eli Kristin Hanssveen) wants the freedom associated with dignity and moral autonomy; she wants to dream her dreams, not live them. For fifteen years she has relearnt the capacity for human speech, but the mother only wants to hear her transhuman “noise”, which issues forth in a stream of pointillist coloratura, both mesmerizing and featureless. They become lovers.

Appropriately, at a time when every new opera must seemingly present its own critical reflections on the genre, opera is here both the medium and the subject of the work. The founding myths of the genre, in Renaissance musings on the reunion of speech and song to allow for the unhampered expression of our emotions, are present here in the barely embodied warbling of the cyborgs. At the same time, the island dwellers are also fed and watered for operatic reasons, to mount an annual performance of Fidelio as part of a ritual which allows the transhumans to witness their origins as mortal beings at once enslaved and liberated by their desire. It also eschews simplistic moral didacticism. There’s nothing particularly noble about the humans: the wife with her longing for new technology, the husband (superbly sung by Ketil Hugaas), with his need for brutal sex and dependence on endlessly repeated clichés about touching the sun, the neighbour with the tumour (Hege Høiseter), the son with his nightmares (sung with extraordinary poise and feeling by the treble Aksel Johannes Skramstad Rykkvin). Nor are the transhumans to be mistrusted. Even if their “liberator” Coraig (sung by Nils Harald Sødal) resembles a combination of Mark Zuckerberg and L. Ron Hubbard, he still offers the remaining humans the chance to join his cyborg race in being “uploaded” into the “singularity” – a perfect brotherhood of man represented by ecstatic ruminations on Beethoven’s Ode to Joy. Only the father refuses, in the end, ranting triumphantly about being the “last human”.

Wallin’s music is quite stunning, cleanly directed by Baldur Brönniman and wonderfully played by the house orchestra. Earthy, eerie, elegant, the score sharpens and shapes the imagination effortlessly. The pacing is impressive (this is his first opera) and the final climax nothing short of breathtaking. The score is nicely matched by Leslie Travers’s set, which represents the island as a three-storey steel-framed cylinder, which revolves, rises and falls; the roof is the stage on which they must play their parts.

And yet the enterprise left me cold. On paper the work represents everything for which opera nowadays should strive: provocative of deep thoughts without didacticism, it succeeds brilliantly in integrating its subject into the material of the opera. The meshing of electronic and acoustic sources is beautifully managed, as are the chewed-up snatches of the Quartet and Prisoner’s Chorus from Fidelio.

I still can’t decide whether the fault lies in the score itself, or with David Pountney’s direction. Certainly some of the fault lies with Pountney because, beyond the staging concept, there is scant evidence of a director’s hand. The blocking is messy, the gestures are wooden and, notwithstanding the spray of multicoloured fibre-optic cables coming out of the tranhumans’ costumes, no sparks fly; it’s all electronics, no electricity. Or so it felt to me. And perhaps it is my need for characters with enough emotional credibility to keep one step ahead of a libretto’s onward march which is at fault. Maybe I have not yet evolved enough to appreciate the cold, flat surfaces of the opera of the future?

No one could accuse Modest Mussorgsky’s only completed opera, Boris Godunov, of failing to provoke deep thoughts. As the Royal Opera’s artistic and musical directors, Kasper Holten and Antonio Pappano, write at the head of the programme (perhaps relieved to have got Chabrier’s L’Étoile out of the way), Boris is “an opera about power, about what humans are willing to do to get it, and how difficult it can be to handle when you finally obtain it”. It’s also another fine example of a music drama whose aesthetic force is bent on showing, not telling. This is particularly true of the opera’s first, 1869, version, which sticks much closer to Pushkin’s colourful telling and episodic ordering of the story, and ends with Boris’s death, resisting the temptation to twist the knife. Yet the original version of the opera is musically less rich than the revision and much less frequently staged. This is the Royal Opera’s first go.

Richard Jones’s staging should take its fair share of the credit for this storybook telling of the piece, which has just the right balance of whimsy and gravity to sustain 130 minutes of uninterrupted stage action. The prologue is preceded by a stylized tableau of the tsarevich Dmitry playing with his spinning top. Dmitry is masked, as are the assailants who sweep silently upon him, slitting his throat. The murder is so effortless it seems almost comic. But as the scene is replayed some six times throughout the evening, its power to haunt grows steadily, allowing one to grasp the kind of nightmare tearing at Boris’s conscience, eating away the delusions of this doting father and ostensibly caring leader with the inexorability of karma.

Miriam Buether’s two-level set, tiled with bells and other motifs from the opera, Mimi Jordan Sherin’s often stunning lighting design and Nicky Gillibrand’s costumes – with their shades of Orthodox psychedelic – are all superbly conceived and executed. Pappano’s handling of chorus and orchestra is brilliantly paced and Bryn Terfel, in his first Boris, captures instinctively the role’s tragic psychology, his desperate desire to bury the past and yield to a bright future for country and kin. His voice is glorious and never overbearing, except in the scene where the full force of his suppressed psychopathology is revealed, through bared teeth, to the scheming Prince Shuisky. The supporting roles, too, are superbly taken, particularly John Graham-Hall’s inscrutable Shuisky, Ain Anger’s granite-textured Pimen (the monk who testifies to the tsarevich’s murder), and John Tomlinson’s cameo as the barfly monk Varlaam. It is a truly superb show, and while the production is brilliant, it is the heat flying off the soloists that really carries the drama into the auditorium. 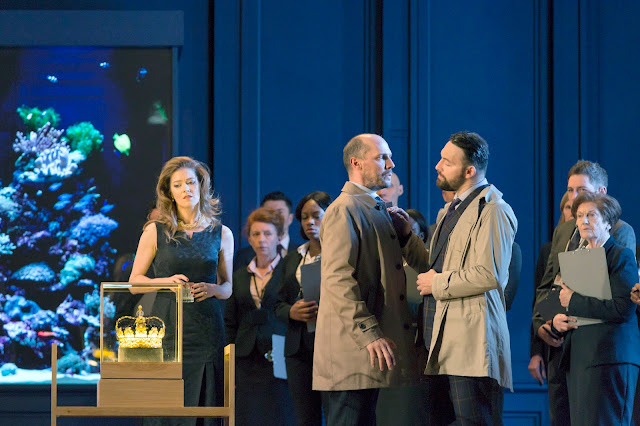