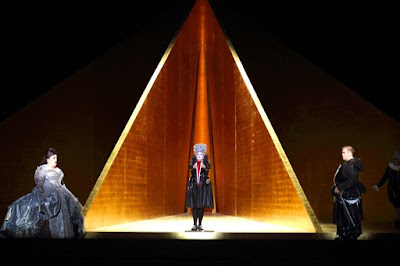 Of all Wagner’s mature operas, Tristan und Isolde is the one whose meaning is the hardest to mistake. Its symbolic opposition of the empty world of false representations and the true reality revealed in unmediated erotic desire is as clear as day and night, relentlessly hammered out in long chains of rhyming couplets. And as befits a work which for many stands as an exemplar of the operatic form, Tristan’s dramatic logic and content seem to derive entirely from the music, whose opening statements do not so much represent the idea of an unbearable, infinite yearning as supply its definitive expression. The “action” flows seamlessly and seemingly self-evidently. Ask listeners to explain it and many will flounder; but most agree it made perfect sense at the time.

It is perhaps not so far-fetched, then, to suggest that Tristan stands as the centrepiece of a mad cult whose “death-devoted” fanatics succumb, without quite knowing why, to an inexorable longing for their own demise. Perhaps that is why English National Opera waited until 1981 before performing the opera. For a company conceived for the purposes not just of bringing opera to the “people” but of contributing to the “spiritual health” of the nation, the difficulties of mounting an opera so specific in its denial of any connection between spirit and health were always likely to exceed purely logistical concerns. If death is the answer, Lilian Baylis might well have said, we must be asking the wrong question.

How, exactly, opera has been held to contribute to the nation’s spiritual health has changed regularly over the decades. But in recent years the notion that the art form offers something specific that is essential to society’s healthy functioning has largely fallen out of focus, occasionally resuscitated in evangelical tones by the form’s most outspoken defenders, but usually just veiled behind a thin, well-meaning discourse about “the arts” in general. And while the history of English National Opera is one in which debates have been continuous, with regular – roughly once a decade – shifts of power between the company’s artistic leadership and its general management company, the current crisis seems parlous indeed. The last music director, Mark Wigglesworth, barely had time to move into his office before resigning earlier this year in protest at the management’s proposed distribution of budget cuts. John Berry, the previous artistic director and the most divisive figure in a long line of divisive predecessors, resigned last summer when it became clear that the new chief executive and board were committed to radically reducing not merely the scale of the company’s output but also its artistic ambition. The new policy, largely dictated by Arts Council England, is to shrink back to a small core of safe productions of classic repertoire. However you conceive of the company’s past, doing less with less isn’t much of a battle cry for its future.

If Berry’s successor, the young American director Daniel Kramer, appointed in April after an eight-month hiatus, has been contractually obliged to toe the party’s straitened line, his first stage production in the post – cast and planned, of course, long before Berry’s resignation – harks back to the company’s glorious past in combining high musical ambitions with gleeful irreverence. Indeed, if addressing the question of the nation’s spiritual health is taken into account, the company’s new production seems bent less on acquainting its audience with a revered classic than aiming to cure besotted Wagnerians of their sickly obsessions.

The third act opens with Tristan and Kurwenal slumped in a pile of rubbish. Their clothes are torn, their faces, crowned by the few erupting wisps of hair remaining to them, heavily marked by years of unwashed anticipation and accumulated insanity. The castle wall has an open wound in its centre, revealing the lunar grotto of the second act in which the lovers consummated their union in an orgy of opened veins and entwined melody. Nominally, Tristan and Kurwenal are waiting for their princess, Isolde, but in ways all too clearly signposted by the conscious absurdism of the stage direction, they’re really waiting for Godot.

The production’s much anticipated stage sets were designed by Anish Kapoor. The best of them is the ship’s bow of the first act, a three-part fan of massive wooden walls, which combines visual coherence and simplicity with minimal representational function, unifying the stage while dividing the space in a way that frames the character dynamics of the score. A large white sphere dominates the second act’s first scene, while the structure is reversed for the second scene, showing an interior moon landscape of irregular geological formations which, observed through half-closed eyes, resemble entwined bodies ossifying into the rock. In the final scene, Tristan climbs through the wall and finds his resting place in a suitable nook. After Isolde joins him, the pair sink into the blurry outlines of the grotto, one pair of lovers among many who have forsaken the jarring diversity of the earth for the monochrome chasteness of the moon.

Kramer’s lovers, then, are lunatics. In a clever tug at the literal threads of the drama, their specific malaise expresses itself through self-harming. Isolde first draws her knife in the first act, inviting Tristan to strip off his layers of Samurai armour and join her. Their preening attendants flap around in acute embarrassment, dressed as eighteenth-century courtiers with powdered faces and piled wigs. The improbability of the costumes is striking in the way its blunt comedy works on you with its own logic. For to deprive Brangäne and Kurwenal of dramatic gravity constitutes an attack on the received idea of the work as thoroughgoing in its deadly seriousness. But laughter, as any psychologist will tell you, is a healthier way of relieving accumulated tension than cutting your arms with a knife.

To be sure, Kramer is not tarring Wagner’s opera with the same ironic brush that flattens out so many self-consciously modern opera productions. Kramer’s intent, while comic in its expression, is quite serious in its contemporaneity, linking the self-destructive urges of Wagner’s heroic lovers with those of many whose inability to function properly in society also finds expression in a mixture of erotic-thanatic addiction.

Musically, the production finds the beleaguered company firing on most of its remaining cylinders. Stuart Skelton’s Tristan is finely captured, the Australian tenor’s deep reserves of powerful lyricism sustaining the second act and fading only slightly in the third. In the American soprano Heidi Melton, the cast has not found its perfect Isolde. For while her tone is finely rounded and her excellent sense of line well suited to Wagner’s aching melos, her voice doesn’t quite last the distance, already wearing thin by the end of the second act. The “liebestod” is more erratic than ecstatic. Both leads are also hampered in the second act by being made to leap around the moon’s rocky interior.

While Karen Cargill provides a creditable Brangäne, she lacks the sheer beauty of tone one associates with the role. But Craig Colclough’s Kurwenal and, above all, Matthew Rose’s superb King Marke give performances that would honour any production. The orchestra is also at the top of its game, responding with predictable warmth to the return of its former music director Edward Gardner’s baton. As befits Kramer’s comic leanings, Gardner drives the pace faster than most, but never so much that it detracts from the accumulated richness of sound, tracing Wagner’s shimmering arcs with unerring faithfulness. And although I’ll admit it required indulging my own self-destructive urges at the stalls bar to see the staging in a positive light, I emerged from the evening’s critical assault on my favourite opera suitably chastened, amused and invigorated. If opera in the vernacular is partly about dismantling and imaginatively reconstructing our reverence for canonical works, then this Tristan – despite various shortcomings – succeeds handsomely.

The performance I saw was dedicated to the great Liverpudlian tenor Alberto Remedios, who died on June 11. He remains beloved for a wide range of leading roles for the company, among them his legendary performances as Siegfried for the Reginald Goodall Ring. There was no stage announcement and no mention, beyond a note on the ENO website, of the dedication on the evening. Instead, the stage curtain from the company’s 1985 Tristan – for which Remedios gave his greatest performance in the role – was hung before and during the Prelude. As a grand if slightly anonymous tribute to one of the company’s most memorable figures, the gesture also offered mute testimony to the present management’s hazy understanding of its legacy. The uncertainty of its future is little wonder.