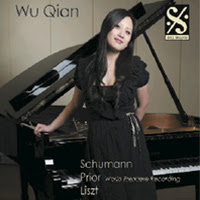 In 1999 the Irish pianist Finghin Collins became the first Irish pianist to win the Clara Haskill prize. The fact that his teacher at the time, the great John O’Connor, was on the jury that year shouldn’t necessarily raise any eyebrows, but it certainly raised the stakes even higher for the issue of his first recording with Claves, the Swiss company who traditionally offer a one-disc recording contract to the Haskill prizewinner. The disc in question, for which Collins recorded the concerto with which he had won the competition (Beethoven 3), was followed in 2006 by a warmly received two-disc Schumann set, the first in an intended series of six volumes covering Schumann’s complete piano works.

Although the series was planned on a one-pianist-per-volume arrangement, with Cédric Pescia’s Volume 2 coming two years ago, Claves seem to have changed its mind and asked Collins to record volume 3.

As with the previous volumes, the selection is note made chronologically, and the current volume includes the Op. 1 Abegg variations of 1831 and the Bunte Blätte Op. 99 (the final “leaf” of which dates from 1849), although most of the works are from the golden era of the late 1830s, including the Etudes Symphoniques, Nachtstücke Op. 23 and the Faschingsschwank aus Wien (Carnival Scenes from Vienna) Op. 26.

Collins is a pianist with a clear head and dazzlingly accurate fingers. From the lilting thema of the Abegg, which is given just enough room in which to dance, to the somnolescent close of the Bunte Blätte’s Geschwindmarsch, there was uniform excellence of judgement. I have heard more exciting accounts, say, of the more explosive variations in the Etudes Symphoniques (III and V (Agitato), for example), and one doesn’t always get the sense of unease and hesitancy that plays an equally important role in Schumann’s aesthetic. But the Irishman’s restraint pays dividends in terms of sustaining the clarity of texture these works call for but don’t always receive.

Is Wu Qian yet another young female Chinese pianist of dazzling talent? The short answer is yes. The slightly longer answer is that she may prove to be one of the best yet. Certainly, if this debut recording of Schumann’s Kreisleriana with Dal Segno is anything to go by, Wu Qian combines fearlessness with technical finesse and a remarkably intuitive sense of timing.

Schumann’s great – perhaps greatest – piano work is no project for the meek, not particularly because it is technically difficult but because everything in it – like the fictional kapellmeister of ETA Hoffmann’s Fantasiestücke on which it is based – is always tantalising close to overbalancing. The tonalities are continuously ambiguous, but not in a way you can make too much of a meal out of, and while the emotional range is extremely wide, the listener is never sure whether the emotions themselves should be taken too seriously. A daunting task, in other words, for any pianist, but Wu Qian simply trusts to her instincts and the results are quite simply flawless. The second movement, whose series of faltering starts and abbreviated lyricism can test the patience of any pianist, is a particular triumph. Unsurprisingly, the Liszt – the 12th Hungarian Rhapsody and the Petrach Sonnet 104 – is also excellent.

If at 24 Wu Qian can be considered young to be displaying this kind of musical maturity, what of Alexander Prior, who at fifteen could have be found conducting his own ballet score of Kipling’s Jungle Book in Moscow. Qian plays Prior’s Svyatogor’s Quest, about the giant knight of Slavic legend who had both a Pagan and Christian incarnation. Prior’s score, for me, is somewhat derivative (Shostakovich, mainly) and though technically very proficient, at nearly 20 minutes, is lacking the kind of interest that would lead one to give it too much repeated listening. Perhaps one needs to know more about Svyatogor himself. At any rate, Wu Qian’s performance does the work no injustice.
Email Post
Labels: classical music