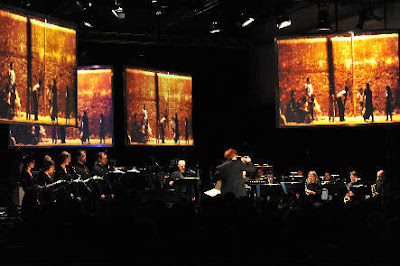 Until relatively recently, the music of Enno Poppe was not well known in this country, but it has been a regular fixture at Huddersfield since Graham McKenzie became director of the Contemporary Music Festival in 2006. Poppe’s profile maps neatly onto McKenzie’s programming ambitions, which have been both to embrace elements of the experimental fringe, with its emphasis on sound art and visual display, and to strengthen connections with the ascendant generation of composers from Northern Europe. Drawing on his education in composition at the Hochschule der Künste in Berlin, and in electroacoustic, synthetic and algorhythmic techniques at the city’s Technische Universität, Poppe, now forty-one, has assembled a diverse catalogue, ranging from tightly knit, process-driven works – often with pithy, suggestive titles, such as “Rad” and “Herz” - to more expansive pieces for larger ensembles. Interzone, a multimedia concoction based on the sheaf of writings by William Burroughs which bears the same name, is probably his most ambitious work to date. Since hearing its first performance at the Berliner Festspiele in 2004, McKenzie has wanted to bring it to Britain.

Interzone opened proceedings with a single performance in Bates Mill, a former textile warehouse which, despite a noisy heating system and ankle-snapping draughts, has become one of the festival’s best venues. It has taken McKenzie four years to arrange this performance, and no wonder, for in addition to the twelve-strong force of Ensemble Mosaik the work requires five vocal soloists, a further speaking and singing voice part, an elaborate electro-acoustic rig with a battery of carefully positioned speakers, and two sets of paired projection screens controlled by the video artist, Anne Quirynen, and a technician.

The room buzzes with electrical and nervous energy. The first thing we hear, however, is a disconcertingly understated voice, coming from a figure on one of the screens: “Like Spain, I am bound to the past”, it begins, without a hint of the mock grandeur of Burroughs’s opening, the diction pared to the bone. “One morning you wake up and notice: this is the day you see through compound eyes. It takes some time to realize: you may or may not close your eyes, but there is no way back.”

Burroughs derived the word “interzone” from the international zone in Tangiers, where he lived in the 1950s, and used it for a collection of writings, some of which found their way into his first novel Naked Lunch (1959). Although Tangiers itself figures in the text (which has been adapted into an English and German libretto by Marcel Beyer) and in Quirynen’s multilayered films, Poppe’s notion of Interzone is more concerned with cities in general and what the composer calls “interstices” – the kinds of perceptual thresholds which are most readily experienced when we find ourselves lost in an urban environment. Quirynen’s collaged cinematography is appropriately restless, so that although streets and buildings can be made out as streets and buildings, our recognition of them is never allowed to stabilize. Signs of life appear, recede and reappear, leading to the two final scenes in a Tangiers souk and by a war-damaged wall. In both, our attention is drawn to central female figures, to whom clear visual and emotional access is blocked. We cling to fragments of facial expressions, our ability to sympathize and to identify thoroughly dismantled.

Poppe’s music follows the same design of bewildering collage, but each episode is painstakingly conceived. As in his other compositions, Poppe works by establishing and breaking patterns, using precisely articulated rhythmic motifs alongside and within areas of colour and timbre that vary from ghostly, semi-wordless voices to the swirl of a recorded electronic track. The ensemble is biased towards single reed instruments, with three clarinets and two saxophones, making for an eerily unbalanced sound that softens when broadened out by accordion, horn and flute. The Algerian setting is referred to by a reedy muezzin motif, the microtonal structure of which is absorbed into the overall harmonic spectrum; though dense and complex, the musical language is rarely dissonant, more usually simply amorphous. As with the video, the final two episodes, which consist of a violent frenzy of reeds and percussion followed by a luminous duet for soprano and saxophone, gesture towards an emotional climax – although the emotion, oscillating between fear and desire, is hard to pin down. Poppe had not conducted Interzone himself before this year, but his lead in Hudderfield was impressively clear. And in a work in which everything seems to wrestle with its opposite, his gangly figure, with its mop of red hair and apparently elongated arms, made for a striking visual antidote to the brightly lit and immaculately composed Omar Ebrahim, the narrator on stage and on film.

If much of Western music, with its studied culture of close listening to harmonic and thematic “argument”, may be considered in terms of the sense of individual power and common freedom won by its audience, then Interzone can perhaps be approached as a study of powerlessness, of our failure to grasp phenomenal particulars. By turns aggressive and seductive, Poppe and Quirynen’s audio-visual conjuring of “compound eyes” is a tour de force. And though it may be too soon to call this Interzone a masterpiece, the sense of its having forced entry to an aesthetic sphere from which, as Burroughs put it, “there is no way back”, is palpable. At the very least, it should provide a beacon for composers and audiences who wish to see video technology abetting rather than obstructing artistic intention.

Power relationships of a different kind were explored in a concert given later the same evening by the Bozzini Quartet, in which the first two quartets by the German- Argentine composer Mauricio Kagel (1931–2008) were interspersed with two works by the Irish composer Jennifer Walshe. Both Walshe’s “blurt”, from 1997, and the newly composed “Marlowe S”, begin where Kagel leaves off in his inside-out approach to the genre. The Kagel pieces – from the mid- 1960s – unravel the performance and conversational gestures at the heart of quartet playing, and call for a range of extended techniques, the musicians occasionally exchanging bows for knitting needles and serrated wooden rods. But Walshe’s two pieces raise the stakes further by turning musical performance into theatrical psychodrama. The four instrumentalists are required to enter at different times, experiment with different seats and also to interfere with, or assist, each other’s playing. The cellist has the most fun, turning her instrument upside down before eventually pointing a gun at the first violinist – with an added frisson lent by the fact that, in this case, the cellist and violinist happen to be married. Though more performance art than music, Kagel’s now dated idiom and Walshe’s spry contemporary spin were given the full benefit of the doubt by the Bozzini’s customarily spirited delivery. The concert made an interesting counterpoint to the festival’s other main string quartet concert, in which the Arditti Quartet performed Brian Ferneyhough’s latest essay in the genre.

The Ardittis have been responsible for the premieres of each of Ferneyhough’s six string quartets. The latest, which was given its first performance in Donaueschingen a month before coming to Huddersfield, contained some surprises: its supersaturated expressivity and tangled polyphony yielded moments of stasis and even the occasional consonance. The problem was that you would barely have known it from the performance. So fluent have the Arditti Quartet become in taming the virtuosic heights of composers like Ferneyhough, that they often appear to skate over the music’s purposefully abrasive surfaces. The result is that the expressive intensity and technical density so highly prized in high modernist circles, on account of these qualities’ supposed resistance to commodifiable fluency, can come to seem almost routine. This becomes a problem when one considers that the Arditti Quartet, with their impeccable pedigree and long record of delivering and setting down definitive accounts of works by Feldman and Xenakis, Lachenmann and Ligeti, necessarily exercise an extraordinary influence over the soundworld and technical vocabulary of the contemporary string quartet.

It was good then, that a second concert, showcasing three parts of an ever-expanding work by the Norwegian violinist and composer Ole-Henrik Moe, showed the quartet at their fearless but committed best. This possibly owed something to the fact that Moe, who intended to appear alongside the quartet in the new, third part of the work, had been taken ill. As a result, the quartet’s former second violinist Graeme Jennings, on the strength of a few hours practice and a single rehearsal, stepped in to play the solo part of “Lenger”. The new movement has all the players circling around the highest reaches of their instruments in a tremolando so sustained and rapid that even the best technique is put under severe pressure. That pressure, though, achieves a staggering release in the concluding passage, in which static, barely audible chords seem to lift the texture with irresistible force, as if someone has tripped a zero-gravity switch.

Moe is one of a growing number of Scandinavian composers who bring humour to the otherwise fairly serious business of contemporary art music. The presence of the Danish composer Hans Abrahamsen and the Norwegian Rolf Wallin added further to the welcome sense that Huddersfield’s winter mists are increasingly dappled by northern lights.

Abrahamsen’s Schnee (snow) is a series of intricately structured and textured canons for the Ensemble Recherche. Lasting almost an hour, it is a contemplative work which, like Interzone, makes demands on its performers’ sense of rhythm and on audiences trying to follow its closely worked logic. But unlike Poppe’s collage, Schnee produces no sense of moody uncertainty. Rather, as the counterpoint weaves between instruments arranged in pairs around a central percussionist, one feels delightfully light-headed. Rolf Wallin’s recent work, by mild contrast, seems lighthearted. In a well-sculpted programme given by the London Sinfonietta, three works by Wallin – presented alongside solo pieces by Xenakis and Lachenmann, and Sciarrino’s brief “Quintettino” – underlined his stylistic roots as well as his playful originality.

The final pleasure of the festival was Rebecca Saunders’s Chroma, written in 2003 for the vast spaces of Tate Modern’s Turbine Hall. Saunders deploys her players and instruments – a standard ensemble with piano and several percussion rigs, but also a series of clocks and miniature music-boxes – in such a way that the coincidences of sound articulate and reshape our sense of space, which changes as the players move about the auditorium. Made up of “sound-surface” fragments, Chroma amounts to a four-dimensional jigsaw puzzle. And although a far cry from the austerity of the Turbine Hall, Huddersfield’s town hall, with its rich acoustic and (like the music) highly decorated interior, proved an ideal venue. Certainly, the members of the German ensemble musikFabrik appeared to have no difficulty negotiating the tight staircases separating the main hall from the upper galleries. Best of all, they performed Saunders’s work twice – very much the icing on the frozen architectural cake.