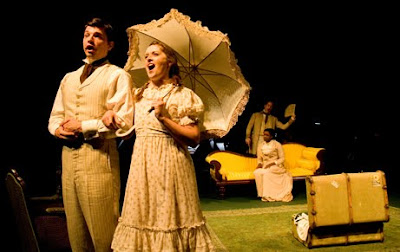 Reviewed for the TLS, 4 Sept

Anyone familiar with the “verismo” of fin-de-siècle Italian opera, or with its eighteenth-century buffa precursor, richly praised in progressive French circles for its “vraisemblance”, will know that reality, in the usual sense of the term, ventures only with great caution on to the operatic stage. In large part this is down to the basic unreality of the mode of representation itself: in real life we speak rather than sing. But with song’s easy recruitment of a kind of attention focused less on what is being said, than on how someone says it, when some facet of reality is successfully conveyed at all, it is conveyed with great force.

It is just such a measured realism that one finds in Julian Philips’s and Edward Kemp’s interesting new chamber opera The Yellow Sofa. On first impressions, the drama seems more symbolist than realist: the action and dialogue are both highly stylized; the music protean, revelling in a wide variety of styles, without ever seeming to settle; and one of the main characters is a piece of furniture. This latter object has, in fact, two incarnations: its inner life is represented by a mezzo soprano while its outward form is that of a grandly upholstered yellow sofa which, as if the other accoutrements of symbolism aren’t yet sufficiently obvious, happens to be the same art nouveau creation on which Golaud sits in Glyndebourne’s production of Pelléas et Mélisande. The overall effect of the work, however, is miles away from the hazy abstractions of Debussy’s work, and Philips’s and Kemp’s short opera leaves one with a sense of something very normal having taken place: two lovers reunited because they miss the domestic habits that once bound them together in modest comfort and affection.

The opera’s “realism” is taken directly from the novella by the Portuguese writer Eça de Queirós, Alvez e Cia, on which it is based. A diplomat, who spent much of his time in England, Eça de Queirós was also a novelist influenced strongly by Balzac and Flaubert. He is not now widely known or read by the majority of non-Portuguese readers, but his comic satirical portraits of Portuguese bourgeois society, as well as his numerous reflections on the oddities of English society, are illuminated with a grace and compassion.

Alvez e Cia (which means “Alvez & Co” but was translated into English as The Yellow Sofa) concerns a Pooterish nobody whose equilibrium has been upset from infancy by being landed with the cumbersome name of Godofredo. This impropriety is repeated in adult life after Godofredo’s gives the absurdly grand sofa of the title to his wife as a wedding present. Coming home to find his wife joined on the sofa by his business partner, Machado (“Lisbon’s own Don Juan”, as a languidly sliding motif repeatedly casts him), Godofredo sends his wife to stay with her father while he works out how to reconcile himself to the deception. His partner’s scorn deepens in response to Godofredo’s absurd proposals for a duel, his father-in-law cons him into paying for a lavish stay in Sintra, and his friends amuse themselves at his expense, eventually devising the solution of pretending that nothing ever took place. And yet, somehow, the sense of ridicule transfers from Godofredo to his tormentors. Reunited with his wife Ludovina, after a chance meeting outside the opera house, the pair return with the audience’s blessing to their sofa.

It is the combination of the fluent, dramatically immediate score with the cleverly controlled pacing that allows Philips and Kemp to relocate Eça de Queirós’ compassionate heightened realism on the stage. The action is preceded by a kind of perpetuum mobile device in which the couple and their maid come and go to the strains of a folk song, various street noises and a halting waltz played on a warped (prepared) piano. The aural texture is monitored by a ticking clock while the visual design is dominated by the sofa, groaning with unachieved significance. The sofa sings in the smoky Portuguese idiom of Fado, particularly appropriate given the world of exaggerated emotion being conjured, with expertly scored writing for the classical and traditional twelve-string Portuguese guitar accompaniment. Elsewhere the vocal style wavers between strong, almost heady lyricism and a rhythmic declamation underlined by restless and often very stirring string writing. There is also a great deal of closely worked ensemble music, which amplifies the central tension in the opera between Godofredo as he is, and Godofredo as he imagines everyone else sees him.

Commissioned as part of Glyndebourne’s worthy chorus development scheme, which exists to develop young talent within the chorus by offering opportunities for more prominent stage roles, it is perhaps not surprising that the quality of the singing varied. But there were noteworthy performances by the baritone Callum Thorpe, as Godofredo’s vain and pompous friend Carvalho, and the soprano Elizabeth Llewellyn as Ludovina, who conveyed timidity and inner turmoil without ever forcing her characterization. The Britten Sinfonia, conducted by Leo McFall, were excellent.

The opera plays out swiftly, aided by Frederic Wake-Walker’s economical direction. And the emotional climax, when it comes, takes one by surprise only in the sincerity and warmth of feeling it generates. The chance meeting between the lovers prompts Godofredo to complain that the clock has stopped ticking (Ludovina was the only one who knew how to wind it) and entangles the pair in a soaring duet as they realize the extent to which they remain emotionally attached. “You have shamed me, shamed my name, shamed my furniture”, Godofredo complains to the man who cuckolded him. But in the end, it is his furniture that redeems him.
Email Post
Labels: classical music Literature opera