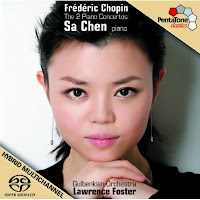 The Chongqing-born pianist Sa Chen first gained international recognition 12 years ago, delighting the audiences and judges of the Leeds Piano Competition with the delicate brilliance of her technique and her youth – at 16 years old, she was the youngest competitor that year. In the intervening years, having studied with Joan Havill at the Guildhall and won the 2005 Van Cliburn competition, she has recorded two discs, with JVC and Harmonia Mundi. The third and present disc contains the first fruits of her exclusive contract with the sharp-eared executives of PentaTone classics, recorded in Lisbon's Gulbenkian foundation last summer [July 2008] with the resident orchestra conducted by Lawrence Foster.

Possessed of exceptional talent and a grasp of Chopin's melancholic lyricism both instinctive and thoughtful, Sa Chen is a natural in this repertoire. Lovers of his two concertos will find themselves rewarded by an interpretation that emphasises the works' expanded intimacy, albeit at the expense of some of the drama. But all musicians succeed by playing to their strengths, and Chen's youthful, light-fingered self-confidence is certainly worth trusting, as swathes of Chopin's cascading gracenotes emerge limpid and gleaming, marked by a clarity of touch that clears the ear's path to every note. In both slow movements, played with generous but undisturbing rubato, Chopin's gently logical harmonies hang in the air just long enough to catch the falling arabesques, cushioning them gently before launching them off again to explore the wistful inner reaches of delight.

The orchestra follows her attentively and sensitively, never missing the pianist's cue. Only when stranded by themselves, at the mercy of Foster's somewhat leaden baton, does the poetry evaporate momentarily. But this is as much Chopin's fault as Foster's, particularly in the E minor concerto where the composer's ambition to give the orchestra a little more autonomy makes for some rather rough-edged architecture.

The recording quality is excellent, deep and well defined in stereo – presumably even better when played on the Super Audio equipment I do not possess. The bonus DVD contains some studio footage – offering visual confirmation of the orchestra's attentiveness to their diminutive guest – and an unremarkable interview with James Jolly in Bechstein's London showroom.
Email Post
Labels: classical music