When a Ravel disc lands on your desk entitled "Favorite Flavours", one does not hope for the best. The transliterative inconsistency notwithstanding, the appeal to the gustatory model smacks of the clichés that have worked steadily against serious appreciation of Ravel for almost a hundred years.

Not to hope for the best and subsequently to receive it, though, has to be one of life's greater pleasures. Thus it was with this new recording of Ravel two-piano arrangements from CPO's dymnamic Genova & Dimitrov duo. As a couple both in life and at the keyboard, Aglika Genova and Liuben Dimitrov have the measure the French master's oeuvre in a way that few have managed. I've never heard them perform live, but from listening to the recordings you can sense that here are indeed two musical personalities locked in a shared understanding. That, and they clearly know each other's timing to the millisecond.

Interestingly, the disc includes the full range of possible Ravel two piano arrangements, with a work primarily intended for two piano performance (Ma Mère l'Oye), a work published in its two-piano version before being scored for full orchestra (Rapsodie espagnole), a two-piano arrangement by Ravel from the full score (La Valse), and an arrangement of a Ravel score by someone else, in this case Léon Roques, extracts from whose arrangement of the suites from Daphnis et Chloé are included.

Only the latter causes problems of credibility for Genova and Dimitrov, but this has more to do how much is lost in the translation to piano. As for La Valse, Ravel's lurching, rapturous poem just rips through the bright acoustic, every peak and trough beautifully sculpted by immaculate preparation. Rapsodie espagnole is also exemplary, the repetitive structures of this mechanistic masterpiece driven forward with the aural equivalent of a finely calibrated screwdriver. 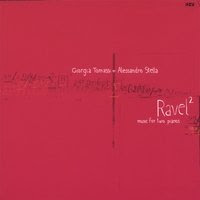 Indeed, one of the benefits of hearing Ravel's orchestral music on the piano is that it reminds you just how structurally robust Ravel's compositions are. The piano versions – where a simple effort to visualise the movement of hammers and dampers inside the pianos brings to mind a kind of enchanted factory's frenzy of magical confections that would make Nissan executives weak at the knees - bring well to the fore just how in tune Ravel was to his age of advanced industrialism and mass-production.

Ravel's most mechanical, steam-powered piece, Boléro, is included in an arrangement on another Ravel two-piano disc from the small Italian KHA label. The young pairing of Giorgia Tomassi and Alessandro Stella bristle with the requisite energy but lack the poise and purpose of their German colleagues. While in Boléro they are let down, frankly, by a work that really suffers from the compression of its timbral range, in Rapsodie Espagnole and La Valse, for example, they give in to the urge to luxuriate, leading to wobbly timings, inner melodies losing coherence and, ultimately, a dissipation of the music's expressive core.
Email Post
Labels: classical music