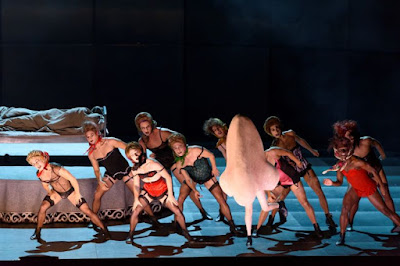 A scene from The Nose © Bill Cooper

Shostakovich’s first opera, an adaptation of one of Gogol’s absurdist St Petersburg tales, received its premiere in Leningrad in January 1930. In its exuberant humour and stridently coloured score – populated by techniques drawn from cinema and experimental theatre, and by the soundworlds he had hoovered up during his recent visits to Germany and France – it seemed like a perfect fit for the explosive cosmopolitanism of Leningrad under Lenin’s New Economic Policy. But during the course of the three years between The Nose’s conception and its performance, Stalin’s cultural conservatism, fiercely prosecuted by the populist press, began to erode the experimental aesthetics of the 1920s. The Nose delighted its first audiences, but was savaged in the press as decadent nonsense; the run was curtailed and the piece disappeared for decades.

It will be interesting to see how Covent Garden’s first ever production of the opera, which opened last weekend, will fare. The curtain fell to thunderous applause, sure enough, but reviews don’t always echo the fervour. Where’s the deeper meaning, where’s the heart, they often ask. The questions are understandable, too – the Shostakovich industry is built on the search for deeper meanings. But what if there aren’t any? What if Shostakovich just happened to write the music he was asked to write?

Certainly, his special affinity with Gogol’s absurdism (his unfinished third opera, “The Gambler” was also a Gogol adaptation) provides support for this view. For Gogol’s absurdism, unlike its modernist equivalents, was never intended as thoroughgoing political and philosophical satire. The fantastical elements are there to bring the absurdity of everything else into relief; with one key detail askew, all the others gain in vividness and presence so the surface bursts with colour and tension. To look for a hidden meaning is to miss the point. Everything is visible, absurdly so.

Everyone in the enormous cast of the Royal Opera’s new staging, directed by Barrie Kosky and conducted by Ingo Metzmacher, wears a fake nose. Everyone that is except Kovalyov, the anti-hero whom Gogol sends off on a wild-goose chase of a search for his mysteriously missing proboscis, last seen attending a funeral in the uniform of a State Councillor. What works in Gogol works on the operatic stage in the same way: the incongruous juxtapositions offset the colours and naturalize the chaos, allowing us simply to give ourselves up to the procession of bearded ladies, bicycle-propelled café tables, gay policemen cavorting in their underpants, and line of tap-dancing giant noses. Police brutality, anti-Semitism, illicit homosexuality all come and go in the same way: deeper meanings are all grist to the mill of Kosky’s merry-go-round. In Klaus Grünberg’s ingenious set designs, this is exaggerated further by the use of a giant camera aperture as a screen.

The staging works well because it follows the wild pace, brash textures and associations of the score, which beyond Shostakovich’s home-grown crooked lyricism and his recently absorbed influences of Stravinsky and Berg, is full of the garish brilliance of the music hall and circus. Metzmacher’s control is crucial here, because the succession of jagged edges, lopsided rhythms and shimmering dissonances, punctuated by lightning changes of texture, give the impression of a procession of moments opening up avenues that don’t lead anywhere. Logic and structure are nowhere to be found, and a conductor who wasted any time looking for them could quickly ruin things. But Metzmacher controls the enormous cast and extended chorus and orchestra with apparent ease; the orchestral colours emerge with precision, the voices pierce and penetrate as they should and there are no mishaps of the kind one increasingly finds in first-night performances in this age of under-rehearsal.

Indeed, Kosky and Metzmacher’s achievements can be measured by the fact that the only thing wrong here is that it feels a touch too long – and much of that is the result of the bizarre decision to perform the opera without an interval (were they worried people would leave?). Everything else, though, flows fearlessly, with the company firing on all cylinders. Martin Winkler excels as Kovalyov and John Tomlinson, tapping a recently discovered vein for comic brilliance, is in his element in the roles of Ivan Iakovlevitch (the barber who finds the nose in his morning loaf), Newspaper Clerk and Doctor. The dancing, especially that of the young Ilan Galkoff (who plays the runaway nose), trades successfully on the rising hilarity, and David Pountney’s English translation does a fine job of keeping the listener’s eyes off the surtitles and on the unfolding chaos of the present.

If there is a deeper meaning to mull over, perhaps it’s this: The Nose, begun when the composer was just twenty years old, is no youthful experiment. On the contrary it parades, with dizzying pace, but also in moments of striking poise and fleeting intimacy, the composer’s entire mature stylistic gamut. It doesn’t lack depth. Rather, it places Shostakovich’s music where it clearly wants to be: right slap-bang on the surface.