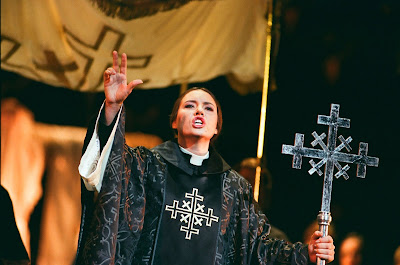 Alongside Dido, Isolde and Lulu, Norma is a quintessential soprano role, encompassing almost every facet of operatic womanhood. Her magical power, expressed and exercised solely through the voice, is compromised by an intense vulnerability; she is possessed by fear, betrayal, loyalty, maternal ambivalence, and caught in a conflict between erotic passion and chaste purity which finds its culmination only in death. Most remarkably of all, her character – whose unravelling drives the entire action of the opera – is first expressed in its entirety in a single cavatina; its beguiling simplicity belies the desperation of its prayer for peace – and peace of mind.

It is for this reason, perhaps, that between the two outstanding twentieth-century interpreters of the role, Maria Callas and Joan Sutherland, it is Callas’s performances that have become definitive. For Callas, with her distinctively open timbre, was for many the supreme personification of precisely this conflict between irresistible vocal power and extreme vulnerability. Still today, the sound of her instantly recognizable voice evokes absurd degrees of partisan devotion; and also a kind of love, almost patronizing in its quality, but focused entirely on the individual. Norma, for many, became Callas.

There is more than a note of Callas in the Bulgarian soprano Sonya Yoncheva’s performance of Norma – her debut in the role – in a new Royal Opera production by Antonio Pappano and Àlex Ollé, which has just opened the new season at Covent Garden. I don’t think this represents anything like a conscious imitative choice, or even homage – more a case of being drawn, irresistibly, to a stylistic centre of gravity which has come to sit at the heart of the role. That said, to close one’s eyes at various times was to dream a little private dream which, for once, did nothing to cut against the fabric of the performance and much to deepen it.

Yoncheva’s is the stand-out performance in this mixed but still quite staggeringly powerful show. She doesn’t, of course, bring everything of Callas to the role, and there is much in her performance, and even more in her controlled and characterful acting, which owes nothing to her great predecessor. But while her singing of “Casta Diva” will certainly acquire more depth and subtlety over the course of the run and beyond, in the second act’s chain of vocal wonders she is already not far short of supreme. Certainly, the absence of Anna Netrebko, who pulled out of the production last spring (Yoncheva had to be released from singing Mimi at the Met to replace her), barely registers. Yoncheva may well emerge as the Norma of our time.

The supporting roles work best here when they acknowledge their satellite status, gravitational agents which exist to draw out the various facets of Norma’s character. As Oroveso and Adalgisa, Brindley Sherratt and Sonia Ganassi do well here in not seeking to over- define their roles. Joseph Calleja’s Pollione does have flashes of brilliance and power, but is too clumsily drawn and the chemistry between him and Yoncheva only starts to fizz in the opera’s closing minutes. The chorus, under their new director William Spaulding, performs wonderfully in material where the balance is often very hard to gauge, and the orchestra is in fine form, despite some rather mixed conducting from Pappano who, as ever, proves wonderfully alive to the melodic flow of Italian opera but less astute as a pure accompanist. The oom-pah quality of much of the orchestral writing emerges as unnecessarily leaden.

The musical problems are exacerbated in this respect by Ollé’s ritualistic production, which puts enormous emphasis on the processional aspect of Oroveso and Norma’s cult, so the stagecraft leans on the score in ways it really can’t support. Ollé, fresh from his triumphant Covent Garden production of Enescu’s Oedipe earlier this summer, has transplanted the action to a modern-day religious sect which, with the exception of the privileged ceremonial role accorded to the female characters, is modelled precisely on Roman Catholicism. There’s nothing wrong with the idea as such, and sticking with any strictness to the original setting – in which Norma is a druidess in Gaul during the Roman occupation, desperate to hide and also to resuscitate her secret love affair with Pollione, the Roman proconsul – rarely proves satisfactory. Moreover, it is entirely to the point that Norma stands at the heart of a closed, fetishistic culture terrified of multifarious others – and the production luxuriates in Alfons Flores’s set and Lluc Castells’s costume designs in a way that harks back to a much more luxurious age in the Royal Opera’s history. The panoply of Catholic roles, vestments and accoutrements, as well its corollary in the fascist military uniforms of the laity, strike the eye tremendously, and have an enhanced dramatic force for anyone who, like Ollé and his colleagues, remembers Franco’s Spain. The problems, however, relate to the Church’s representation as being very much an establishment institution of great wealth and power, rather than a threatened cultural minority overrun by a brutal militaristic empire. Indeed, during the whole first act, the murmuring of Roman Catholics about their Roman enemies, all hemmed in by walls of latticed crucifixes, is altogether too confusing.

In the second act, however, everything works. There is a wonderful coup de théâtre with the emergence of Norma’s designer apartment, hidden directly underneath the altar, where her children ride bicycles and play with their fortress before falling asleep on a stiff, white, rectangular sofa in front of Watership Down. Indeed, the film plays for such a long time that one fears Norma’s great crisis of maternal conscience might emerge to the tune of “Bright Eyes” rather than “Teneri, Teneri figli”. The final two scenes, too, have a coherence and dramatic urgency almost entirely lacking in the first act, leading to a conclusion in which the full tragic force of Bellini’s opera is felt in all its tremendous power.