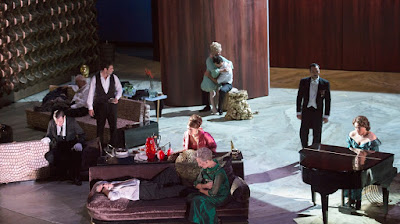 In Luis Buñuel’s film The Exterminating Angel (1962), Edmundo de Nobile and his wife host a supper party. After entering the house, twice, by the same entrance, neither the guests nor their hosts nor their one remaining servant find themselves able to leave the room. The door stays open but, inexplicably, no one can go through it.

“What I see”, wrote Buñuel two decades later, “is a group of people who are unable to do what they want to do, that is to leave a room. The inexplicable impossibility of satisfying a simple desire.” Buñuel’s description goes against the grain of most interpretations of the film as a social critique of bourgeois psychology in which the thin veneer of “civilization” quickly peels away when the habitual conditions of social life are interrupted. But while social-psychological critique of this kind was an established part of the director’s palette, and the surrealist tradition more generally, Buñuel’s comment hints at a much more basic object; namely, the idea that the rupture experienced in the drama mimics the origin of reflexive consciousness, where the ability to think, in its basic shape, consists in the suspension of action, or the disconnecting of the impulse to act from its natural execution. The conscious appraisal of our environment, and our place in it, occurs precisely as a result of the failure of our instinctual mechanisms to direct the appropriate course of action. When we speak colloquially of “pausing for thought”, we are referring to the experience of a disjuncture in the flow of action. In this sense, Buñuel is showing that the great mystery of the question “What do we do now?” lies not in the actual outcome but in how it comes to be asked in the first place.

In Thomas Adès and Tom Cairns’s new operatic adaptation of the film, which opened this year’s Salzburg Festival and will come to the Royal Opera House next spring, the moments of rupture are articulated with precision and an unwavering awareness of the possibilities of the genre. Bells ring, even before the audience is seated, submerging the habitual pre-performance rituals – the 5 and 1-minute bells, the tuning of the orchestra, the entrance of the conductor – in a growing gloop of cleverly managed overtones. Bells are a calling to a place, but also a calling to suspend work. On the stage, three bewildered sheep stand rooted to the spot. Their presence is due to the hostess’s penchant for practical jokes, but here they just stand, articulating a general condition of stray-ness, as it were. Other devices populate the score throughout, such as the use of chaconne structures, or the way the music lurches into a waltz when certain characters approach the threshold, drawing them back into the scene less by malicious force than by seduction.

This recurring waltz motif suggests that Adès and Cairns – who also conduct and direct the production – are more than aware of the film’s self-indulgent streak; that is, of the way in which the hidden force detaining each character takes the form of each indulging a rare opportunity to become themselves more fully and plainly. Thus the young lovers Beatriz and Eduardo bring their role-play to its end in an (off-stage) Wagnerian love-death; the Doctor goes into diagnostic overdrive; his patient Leonora kisses him on the mouth (“that’s something I have always wanted to do”); Don Francisco acts on his incestuous infatuation with his sister, Silvia, while the latter comes to terms with her maternal love; the butler buttles with increasing desperation; the old man molests sleeping ladies and Nobile fulfils his obligation as host by volunteering himself as a sacrificial victim.

At the same time, the musical world of each distils: the premature Puccinian ejaculations of the lovers, sung by Ed Lyon and Sophie Bevan; the pointillist, frenetic coloratura of Audrey Luna’s Leticia (Cairns and Adès cast Leticia, nicknamed “La Valkiria” in the film, as an opera singer and the party’s guest of honour); the simpering archaisms of Don Francisco (Iestyn Davies); the aristocratic plaints of Edmundo (Charles Workman) take on the specific harmonic hue of Wagner’s Amfortas, while John Tomlinson’s Doctor often sounds like his faithful servant Gurnemanz, as his patient Leonora, marvellously played by Anne Sofie von Otter, channels Berg’s Lulu. The ORF Vienna Radio Symphony Orchestra, expanded with piano, guitar, a lovingly employed (by Cynthia Millar) Ondes Martenot and further electronics, navigates this criss-crossing path, where the distinct idioms sometimes mesh, sometimes keep themselves tightly segregated, with terrific virtuosity. It evidently helps considerably that Adès is himself conducting. Cairn’s stage direction also benefits from the clear-sighted understanding that comes of knowing a work from conception to execution. Hildegard Bechtler’s set and costumes mix Art Deco glamour with shrewd economy, while the revolving set, dominated by the salon entrance (ultimately revealed as a proscenium), reinforces the roving perspective internal to the score and the sense that the piece is a pure ensemble effort.

The two most important moments of rupture occur some way into the first act. As guest of honour, Leticia is half-expected to sing after dinner. Already suffocating in anticipation of the closing in of possibility, she hurls an ashtray through a window before entering the salon. Immediately after she demurs (without saying anything), the guests realize that the evening has run its course and discuss leaving. At the same time, they realize the evening will never run its course unless she does sing: “I will not leave this house until she sings”, declares Raúl; “We will all not leave this house until she sings”, echo the company, as if in premonition not just of how the drama will unfold but of their role in performing an opera, a form that can’t end, as the saying goes, “until the fat lady sings”.

It is thus when the opportunity to repeat this scene arises, several days later, that Leticia understands she can close the circle by accepting the invitation to sing. The “aria” she sings is entirely divorced from the musical world of the piece. Indeed, it is divorced from the historical context of opera entirely, setting a medieval Jewish poem about longing for Jerusalem in Spain to an eerily emptied-out style which, in contrast to the increasingly frenzied chromaticism of the third act’s music, bursts through in a moment of stillness and quasi­medieval flatness.

Before she sings, Leticia gets everyone to return to doing precisely what they were doing before she originally refused to sing, which was listening to Blanca (Christine Rice) play a hypnotic, flowing showpiece on the piano. Afterwards, she is asked to play “Something by Adès”, but she refuses, pleading fatigue. The moment could be mistaken for a rather arrogant nod towards Mozart’s ironic self-quotation in Don Giovanni, but here the force is rather different. Where, after all, in the score’s stylistic kaleidoscope, is what we could call music by Adès? For all its primal vigour, the opera never ceases its distribution of stylistic calling cards, reference and even quotation (of which a demonic disintegration of Bach’s chorale “Sheep may safely graze”, which accompanies the return of Lucia’s sheep, is perhaps the wittiest). Of course Adès has always played this game, but his best music is animated less by the clever nods and winks that populate its surface than by the genuine and deeply felt affections that orientate his roving stylistic compass. As with all music, the invitation to enter its world of sensibilities must be accepted before its qualities can be perceived. In Adès’s case, the invitations often get caught in a gust of wind: you can spend more effort chasing them down than accepting them.

For Adès himself to point to this – Blanca’s refusal means that in the world of the opera, Adès’s music is never played – is therefore not arrogant or irreverent but powerfully significant of the fact that post-modern cosmopolitanism’s lack of anything like a “natural” musical style – and its need for habits of thinking and listening to be refreshed and re-established with every work – answers very directly and poignantly to the suspended condition in which Buñuel’s characters find themselves. Once you’ve paused for thought, you can’t just decide to stop thinking. In this sense, The Exterminating Angel has been the opera Adès needed to write in order to be himself. Like its predecessors, The Tempest and Powder Her Face, the music remains astonishing in its confidence and dramatic versatility; but here, when Adès’s elusive aesthetic itself becomes integrated into the drama’s vertiginous psychological landscape, the music acquires another edge entirely. The effect is intoxicating and at times quite brutal; for all its scorching passion, the opera leaves one chilled to the bone.