Shifts and Shocks: Between Worlds 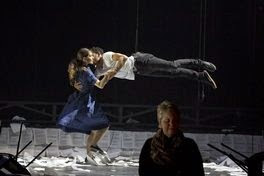 
“I read somewhere”, writes Oskar Schell, the nine-year-old principal narrator of Jonathan Safran Foer’s novel Extremely Loud and Incredibly Close (2005), reporting from the observation deck of the Empire State Building, “that people on the street are supposed to look like ants, but that’s not true. They look like little people.”

As with Wittgenstein’s famous Duck/Rabbit example, Oskar’s perspectival shift can be consciously manipulated. You can decide to see a rabbit, or a duck, but not both at once. But Oskar can’t shift between people and ants. For want of a more precise diagnosis, Oskar is what people used to call a strange little boy. He also lost his father in the attack on the World Trade Center two years previously. The emotional neutrality that allows people to change into ants isn’t really available to him.

This is not the case for the “Younger Man”, one of the handful of unnamed characters who make up the solo roles in Tansy Davies and Nick Drake’s new opera on 9/11, Between Worlds. As he arrives at a “very important meeting” on one of the South Tower’s upper storeys, the man’s confidence is shattered when he approaches the window. Assailed by vertigo, unable to maintain the professional sureness he is so eager to project, he involuntarily starts leaking nervous platitudes (his vocal line shifts from its concentration and becomes jumpy and uncentred). “People are dots and dashes,” he blathers, “just information. Just this glass between me and nothing.”

Whether we knew any of the nearly 3,000 who died in the attacks or not, a sense of incalculable loss still accrues to the memory of the Towers’ collapse. There have of course been many subsequent catastrophes where the loss of life was even greater, but 9/11 has a hold that defies statistics. The event has a liminal function in cultural memory, rather like birth or death in personal memory; memory bends into it, creating a vacuum which exerts a force on everything around it. That an opera has now been written about the inner life of 9/11 may appear inappropriate to some, but in another sense it was inevitable and entirely appropriate. The difficulty of doing it well, however, relates to the fact that cultural memory of the real event still possesses a hyperreality more potent than any possible artistic representation of it, and absorbing it into a fictional world, remarkably well achieved nonetheless by Safran Foer, seems absurdly remote even now.

These difficulties were evidently manifest in the compositional process of Between Worlds. Both librettist and composer remained unsure of what, exactly, they should take as their subject for over a year, and it was only after meeting the stage director Deborah Warner that they decided to deal directly rather than tangentially with the moment of the attacks itself. But, incredibly enough, there is little trace of these difficulties in the finished work, a ninety- minute one-act opera, which seems extraordinarily equal to its task. The two “worlds” of the opera’s title refer, ostensibly, to life and death. The characters trapped on the upper floor are imprisoned between the two realms, each of them coming to accept this in their different ways during the opera’s progress. But the title also relates to a kind of flourishing of sympathy – as it were a study of the gap between ants and people – personified in the link between a shaman-like figure who sits suspended above the upper platform, controlling lines of communication, and a janitor, whose task for the day transforms from one of setting up a breakfast meeting to one of guiding uncertainly those around him to accepting what must be.

Individuation takes place after the shaman appears to reconnect the telephone line; the North Tower falls, prompting the janitor to encourage – and force, in the case of the disingenuous husband – each to reach out to their loved ones and say “what must be said”, as the janitor puts it. There is a good deal of skill in Drake’s libretto, which makes much of the transformation of quotidian platitudes (“there’s never enough time”) to profundities, and uses contrasts between prose and poetry, American English, Spanish and chanted Latin, to map out the fast-changing poetic territory. Deftly framed vignettes supply just enough detail (an estate agent forgets her mobile phone in her hurried, frustrated departure from her recalcitrant toddler son; a businessman lies to his wife about going to the doctor, heading for the fateful “important meeting” instead) to allow embryonic characters to form, but care is taken to allow the event itself to act as a crucible for the real characterizations.

The libretto’s sparseness leaves plenty of room for Davies’s music to shape and transform the dramatic action. The vocal settings trace the shifts in diction without awkwardness, while the orchestra submerges everything in shimmering, jittering continuities which build up a musical version of the kind of inverted vertigo experienced when one is near a tall building, looking up. The aeroplane strikes themselves, eerily prepared by a sudden change in the Shaman’s muttering to a piercing, high-pitched whine (strikingly achieved by the countertenor Andrew Watts) and refracted by the chorus chanting from the Requiem liturgy, send the orchestra into wild paroxysms of hyper-activity which grind the present into an excruciating, lurching continuity. Davies also proves herself wonderfully adept in marking out shifts in the perception of time, using exaggerated rhythmic profiles to spur on the drama before dissolving them into oases of reflexivity. In the lobby scene, during which a security guard tries to reassure a crowd of confused individuals who, unaware of the realities of the situation, are still trying to rescue their palm pilots and briefcases before the markets open, Davies uses temple bells to shadow the panicky speech rhythms but also to undermine, piercing the chorus’s jabbering with its pure sound. But the rhythms subside when the (two) firefighters arrive, screechy tremolo chords in the strings stretching out their gaze as they take in the scale of the moment.

Michael Levine’s spare set of slight, suspended platforms cleverly balances the need for theatrical transparencywith the requirement for spectacle. A wall of papers provides a backdrop for Tal Yarden’s video projections, a wind machine periodically ripples the panoramic views of the city. The collapse of the North Tower is depicted in the entire paper wall’s coming down, like a giant venetian blind slipping its fixings; as the drama nears its conclusion, theatrical illusion becomes less and less necessary. Deborah Warner’s direction makes the most of the limited stage resources, although her talents are most evident in the way the chorus and soloists never seem ill at ease with the purposefully thin characterizations.

The opera’s most beautiful moment, appropriately, both musically and visually, occurs at the end, in a dance between the sister and the suspended corpse of the Younger Man. The pair twirl, to music of gentle movement and unspeakable intimacy, animated by the opposing forces of the sister holding down her brother’s body as the wire pulls it irresistibly towards the darkness above.

Gerry Cornelius’s musical direction is well controlled and the chorus, directed by Stephen Higgins, negotiates admirably the shifts between ritual chant and emphatic narration, splintering occasionally into differentiated lines. It was clear that the ambitions of the composer and librettist – both working in the genre for the first time – are at times frustrated by the spare economies of the set, and some amplification for the orchestra would help the music better establish its presence in the Barbican Theatre’s dry space. There’s also a sense that Davies doesn’t do enough to develop the role of the Younger Man’s mother (Susan Bickley), who is given the opera’s one extended aria and who remains centre-stage for the remainder of the action: much of the audience’s putative connection with the space between the “worlds” of the title comes through imagining it from the mother’s perspective, but her music doesn’t manage to hold quite enough weight.But the fact that the opera made its presence felt at all, creating something so beautiful and troubling against a backdrop of something so awful and upsetting, speaks volumes about the artistic talents of all involved, no less than it does about the power of opera itself to find spaces where it is still, against all odds, worth taking the trouble to sing what can barely be said.