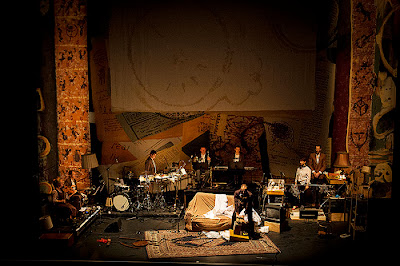 At the conclusion of François Sarhan's multimedia opera Enough Already!(Lachez Tout), we find the protagonist facing down the audience, staring at us in total silence. He has Just distributed sticks of dynamite around the stage and front stalls and connected them to a detonator, and he now holds the plunger in its upright position, fixing the auditorium with an unfathomable gaze, inscrutable in its mixture of disdain and indifference. His body tenses as he shifts his weight over the plunger and . . . .

Well nothing, obviously - it's a piece of theatre, and this is the end. But it's a sufficiently unnerving moment to send shivers down the spine. Could this be the moment when opera finally becomes revolutionary, in the non-art-historical sense of the term? Not only does the piece depict an effort to cause a giant explosion, specifically designed to change the structure of society and unleash anarchy, albeit of a highly poeticized variety, but the performance seems to be a one-off (or so I thought at the time), staged, scripted and composed by someone I've never heard of. It is, furthermore, fronted by a mime artist whose control of every muscle in his body and face is such that it elicits a kind of involuntary submission, a nervous fascination bound up with the marvel of someone's mental states being so hermetically sealed that they are entirely unaffected by anyone else around them.

One learns to expect the unexpected at the Huddersfield Contemporary Music Festival, now in its thirty-sixth year and widely recognized as one of the most interesting and influential new music gatherings in the world, but the blowing up of the Lawrence Batley Theatre would have exceeded by some margin what is meant by "unexpected". Still, the explosion would have been an interesting one to observe from a greater distance because its purpose, within the framework of the drama, was not merely to cause damage but to distribute a highly volatile though sadly fictional compound called "Sibuline". Created by Adolphe Riouls (also fictional) in order to perfect the working of an automatic guitar, an instrument capable of playing by itself whatever has previously been performed on it, the concoction endows inanimate obJects with autonomy. The things around us are thereby freed from the tyranny of commodification and returned, as Heidegger might have put it, to the thingness of themselves.

Bobok, the work's fanatical protagonist, has reproduced Sibuline through reading about it in Henri-Jacques Glaçon's "Encyclopaedia of Imaginary Knowledge", and seems to intend his explosion to restore some dignity and richness to our relationship with our environment. I say "seems to" because nothing is entirely what it seems in this surreal opera and its series of interlocking imaginary worlds. The richness of Bobok's relations with the obJects around him is caused by (or is the cause of) the fact that nothing does what it is supposed to. The first scene is a veritable circus comedy act, Bobok balancing on collapsing chairs, leaping to answer recalcitrant telephones and attempting to read his beloved Encyclopaedia with the aid of lamps whose switches only ever turn on other lamps. Generically, too, the piece is radically disobedient: an opera whose only stage actor is silent, and where the musicians - distributed around the edges of the stage - also speak and chant, acting both as narrators and inner voices, vainly trying to keep Bobok's mind from straying (his urge to kick yapping dogs is a particular cause for distraction). Much of the action takes place on screen, but the sound - produced by two onstage Foley artists - is often at odds with what one sees. Collage techniques and location footage also collide on screen while towards the end, when Bobok returns to the stage to change his wet clothes (after swimming across the Vltava; the film portions are mostly shot in Prague, where Sarhan now lives), he uses the musicians' fingers to hang his clothes and then gets in a tussle with one of the Foley artists over the latter's Jacket, which is dry. Arguably, given that the Jacket only exists to enhance our aural sense of Bobok's own Jacket, he has every right to take it, and the sound artist soon yields, with a rather forlorn gesture of resignation.

The anarchic structure of the action is enhanced by a poly-stylistic and often ironic musical layer, which sounds improvised but is in fact precisely scored (for violin, electric guitar, percussion, keyboard and saxophone). Performed by the Red Note Ensemble, a recently formed and admirably versatile Scottish new music group, the music served less to add an expressive dimension to the drama than to enhance our sense of semi-automatic, anarchically conceived processes pursuing their own ends. The performances of the mimic Claudio Stellato, also a dancer and circus artist, and the two Foley artists, Julien Baissat and Céline Bernard, also had a bravura element. Perhaps the most striking element of the piece, however, and it holds this in common with much "classical" surrealism, is not that the opera's animating force is gradually dominated by a kind of violent call to arms, an irrepressible railing against the status quo, but that the only valid response nonetheless seems to remain a purely artistic one. The revolution the piece seems to call for, though it has many political extensions, is primarily aesthetic in nature: stop, look, listen.

Performed on the final day of the festival's opening weekend, Sarhan's wonderfully executed anti-opera echoed, in this respect, the "shadow opera" by the Norwegian composer Cecilie Ore, performed at the end of the festival's opening day. Entitled simply A, Ore's piece - in its latest incarnation at least - entirely lacks live performative elements, consisting of pre-recorded audio and visual tracks, and has neither characters nor a plot of any kind. It is perhaps better conceived as a kind of soundsculpture, which may be why the organizers chose to stage it not in Huddersfield itself but some 20 miles away in one of the galleries of the Yorkshire Sculpture Park.

The "A" of the title stands both for Agamemnon but also for the Norwegian "allmenn", meaning "general" or "extending to everyone". The text, written in Norwegian dialect by Hilde Andersen and intoned beautifully by the deep, gravelly voice of Joachim Calmeyer, centres on Agamemnon's efforts to overcome his remorse at the death of his daughter Iphigenia. The figure of remorse is then refracted through a panhistorical lens in which acts of atrocity are Justified by the invocation of historical necessity and the bloody, self-fulfilling cycle of revenge.

In this respect, A offers something of a meditation on the central theme of Aeschylus' Oresteia, but much of its power comes from the circular structure of the musical presentation, in which gongs resonate remorselessly to create an oppressive and encircling soundscape that seems both ancient and directionless. Towards the end, the cycles accelerate, and the attempts to obliterate regret begin to reveal more and more cracks. The voice keeps returning to the details of Iphigenia's appearance on the beach at Aulis, her hair and luminous face turned against the ground. But the gongs maintain their order, impassive and entirely unmoved.

The effect of Ore's "shadow-opera" was somewhat hampered by the visual elements, which consisted of phrases and letters proJected onto four screens (which formed a square room around the audience) and gave the impression of a whizzbang PowerPoint presentation gone awry. But the piece retained much of its power nonetheless, and rather more so than the Norwegian composer's latest piece, Come to the Edge, composed for the BBC Singers and given its premiere the following afternoon. The piece uses Christopher Logue's poster-poem to enclose a selection of aphorisms on the subJect of freedom of speech (Washington, Lincoln, Shakespeare, Harry Belafonte), into which are woven extracts from the infamous trial of the Russian protest group, Pussy Riot. The music's use of simple, repetitive rhythmical patterns was interesting for its quasi-liturgical style and for the way in which individual words and phrases slipped in and out of focus, but its stylistic directness had the odd, unwonted effect of highlighting its political impotence.

The opposite effect was achieved later the same evening by the long awaited UK premiere of Georg Friedrich Haas's In Vain, given by the London Sinfonietta (the performance will be repeated in London's Queen Elizabeth Hall on December 6). Like Ore's work, Haas's 70-minute piece (for twenty-four-piece orchestra) uses strikingly simple material so the expressive effect is more accumulative than immediate, but the sense of gradual expansion and contraction gives an extraordinary sense of a composite consciousness being roused to life. In political terms, this was Haas's intention, and the work was composed in 1999 as a response to the resurgence of the far Right in Austrian politics. There are two extended periods when the hall descends into total darkness. The musical material simplifies further, increasing the electric sense of listening and response on stage, and drawing the audience further into the music's constantly shifting ground. The first dark period ends with a single harp suddenly flooded in light. The image of ancient splendour, with the harp tuned to the natural harmonic series, is clearly marshalled as an emblem of hope. The second period is ambiguous and ends indecisively. Played with extraordinary commitment by the Sinfonietta under Emilio Pomarico, it is hard to imagine a more powerful - and, paradoxically, inspiring - expression of latent, impotent rage.