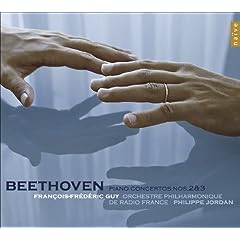 Like many pianists before him, François-Frédéric Guy has chosen to place the music of Beethoven at the heart of his repertoire, and approach. Currently engaged in performing the sonatas and concertos around the world, this new disc of the second and third concertos completes his cycle of Beethoven concerto recordings with Philippe Jordan and the Orchestra Philharmonique de Radio France for Naïve.

Guy is forty this year, thus forfeiting the label of “bright young star” he has worn, well, for quite some time now. But his playing has long been marked by an exceptional maturity of approach. In Beethoven in particular, you get the sense that his recitals and recordings emerge as pinnacles breaking occasionally through the surface of a longstanding and completely continuous friendship between pianist and composer. His concerto recordings may lack the authority of Brendel or Goode’s, the fiery unpredictability of Pollini or Pletnev’s, but with Guy one feels witness to an altogether more personal, instinctual relationship with Beethoven’s music.

The second and third concertos can sometimes make awkward partners, but in Jourdain and Guy’s hands the third is approached as an altogether more delicate beast than is often the case. Jourdain’s orchestra are on tiptoes for the long introductory section, while Guy’s efforts are directed toward generating a sense of almost Mozartian grace, against which the starker passages appear all the more striking. But it is in the second movement that the fruits of Guy and Jourdain’s apparently close relationship are most evident, the pianist’s sense of freedom within this most intimate of the concerto slow movements being perfectly matched by the orchestra.

The second concerto receives a wonderfully lively – at times almost jaunty – outing. The heart of Guy’s approach here is to make the lines sing so that the traditional, classical contours of the concerto come across as both inevitable and unpredictable. He succeeds too to such an extent that in no way does the work appear as the junior partner of the disc. The second movement, in particular, has a breathlessness to it that makes one wonder whether one has heard the work before – unusual in such familiar territory.
Email Post
Labels: classical music