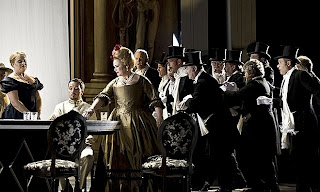 People say the English obsess about the weather, but then they haven’t met the chorus of Modest and Piotr Tchaikovsky’s Queen of Spades, on whom the fluctuations of the Russian spring act like an emotional yo-yo, continually popping up to intersperse the terse drama of Pushkin’s surreal gambling novella with their meteorological tableau. It is a similar story in Sweden, where May arrives like a kind of last minute reprieve, bathing the exhausted, grizzled landscape in sunlight and new growth. It seems fitting then that the month of May, the Tchaikovskys’ chorus’s principal subject of reflection, brought to Stockholm a sparkling new production of the opera in which the contrast between the bucolic and the tragic is carried excellently by Hartmut Schörghoffer’s set designs. The lavish fin-de-siecle interior, in particular, is impeccable: presided over by the magnificent house chandelier and underpinned by an immense marble gaming table which retracts seamlessly into the floor so that the scattered cards and broken glasses can worm their troublesome way into the action of the other scenes. The production itself, the fourth version of the opera presented by the jet-setting Russian Dmitri Bertman, is unfortunately not impeccable. But it is interesting, and captures well the unhinged surrealism against which the opera’s central tragedy unfolds.

The problem lies, as is often the case, with the interaction between the comic and tragic dimensions of the drama. For the latter depends not simply on the credible representation of Herman’s manic but nonetheless noble psychology, but also on the figure of the Countess, who must dominate the entire work as a kind of moral black hole, constantly sucking away at the various levels of action. Of gravity, the mezzo-soprano Ingrid Tobiasson has no shortage, whether singing or, as so often in the work, simply standing, exuding self-satisfaction intensified by restless suspicion. Too often, though, she is directed by Bertman to look merely silly and participate in a kind of cheap and largely irrelevant satire on upper class manners. Still, when her confessional moment arrives – the “repulsive mysteries of her toilet”, as Pushkin famously put it, nicely represented by a bath full of cards – the character’s tragic dimension emerges clearly. Removing her wig and dismissing her coterie of heavily powdered, and quite possibly mothballed, crones in waiting, Tobiasson’s archaic reverie – “Je crains de lui parler la nuit” – was magnificent.

Bertman’s direction also worked against the Lisa of Hillevi Martinpelto. Already somewhat underpowered for the role, she was restricted to the back of the stage for her Act I aria and much of the following seduction scene, from where her voice simply failed to carry across Tchaikovsky’s energetic accompaniment. The smitten Pauline of Karolina Blixt, on the other hand, dominated the auditorium with her powerful contralto. Stefan Dahlberg was convincing as Hermann, more than ably supported by Marcus Jupither’s excellent turn as Tomsky and Jesper Taube as the hapless Jeletzkij.

To find fault with the orchestra, on the other hand, one would have had to be deaf. Tchaikovsky’s score is gloriously involved and varied, and the house orchestra, under the excellent and carefully prepared direction of Christian Badea, had mastered its every nuance. From the quaint, occasionally queasy Mozart pastiches to the thudding, symphonic episodes through which the work’s central tragedy is articulated, the orchestra proved themselves deserving of the highest praise.

The same could be said of the much smaller orchestra in residence nearby on the shores of lake Mälaren, who have spent the Swedish spring preparing for the opening of the Drottningholm season with a production of Ariodante. The tiny baroque orchestra is of course very visible in this theatre, so if you can’t tell how well they all know each other’s playing from listening, you get the picture very clearly from watching them. Listening, though, is ultimately the more rewarding activity, and in a year when Handel’s music has not suffered from underexposure, the zip and dexterity of the players, guided intelligently by Mark Tatlow, was extremely refreshing.

It is a sign of the strength in depth of singing in Sweden at the moment that to learn this Ariodante was a semi-student production required reading the programme. The singing was thoughtful, never bland, and often of a very high standard indeed – as was the acting, which can be hard to pull off in such an intimate setting.

Outstanding were the Ginevra of Elisabeth Meyer and the bass-baritone Andreas Franzén, who played her father. Meyer, in particular, had the measure of her part, turning in some truly heart-stopping embellishments in the Da Capo of “Volate, amori”. She will certainly be one to watch. Meanwhile the mezzo Ivonne Fuchs, though she had some trouble with Ariodante’s somewhat troublesome register, gained in confidence after a rather unsteady start. By the second act she was well into her stride, and if I have heard more polished renditions of “Scherza infida”, I don’t recall ever having been quite so moved by it as I was here by Fuchs’ emotionally nuanced and immaculately mannered performance, aided of course by Tatlow’s attentive direction.

Inexperience told elsewhere in the cast, though to no lasting cost. The simple period production was exquisite, as were the curtain calls, choreographed rather entertainingly to a reprise of the overture’s gavotte.
Email Post
Labels: classical music opera