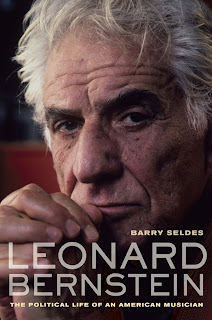 IN AN article he wrote for the New York Times in October 1988 Leonard Bernstein, then America’s most famous conductor-composer, unleashed a stinging attack on his countrymen. He castigated American voters and their leaders for what he saw as a wholesale betrayal of the values on which the union was founded. At a time when “liberal” had become a dirty word, he rounded on his fellow citizens for allowing themselves to be duped by cold-war mythology into sacrificing social and culture budgets for dubious military gain. Bernstein died two years later, his lifelong wish to complete “That One Important Piece”, as he described it in his final letter to his business manager, left as unfulfilled as his longing to see liberal democracy flourish in America.

Why did the popular, powerful and prodigiously gifted Bernstein never compose that masterpiece? This is the central question Barry Seldes asks in his new political biography. The usual answer turns on the suggestion that Bernstein’s talents were overstretched by his heavy conducting, recording and publicity schedules. Critics also like to carp, pointing out that, although he was a brilliant musician, Bernstein somehow lacked the depth of thought and vision necessary to produce a genuine masterpiece.

Mr Seldes’s answer is different. Bernstein, he says, never wrote “That One Important Piece” because the only audience for which he could have written it—an American citizenry united by progressive liberalism—failed to materialise.


A close friend of President John Kennedy and his wife, Bernstein made no secret of his general affiliation with the progressive strain of American political life. Indeed he was mildly notorious for his “radical chic”, as Tom Wolfe put it, and for lending his popularity to whichever “nice liberal cause” happened to come along. Unfortunately for Bernstein, one of the more prominent causes for which he organised a fund-raising reception was that of the Black Panthers. Accused of being a revolutionary, or at best a naif, Bernstein never recovered from the damage this did to his reputation.

Mr Seldes argues that this was unfair. Not only were Bernstein’s politics entirely sincere, they were wholly of a piece with his artistic aims. Nurtured in the atmosphere of committed liberalism generated by the New Deal, and by such musicians as Aaron Copland, for whom artistic progress and the formation of an authentically American artistic identity were inseparable from ideas of social change, Bernstein developed quickly into an able spokesman for American cosmopolitan progressivism’s short-lived ascendancy. However, he was continually followed by the FBI and eventually blacklisted by the State Department. His directorship of the New York Philharmonic Orchestra and his lucrative recording contract with Columbia Records survived only because he signed a humiliating affidavit in which he renounced the full range of his extensive civil-rights and left-wing commitments.

Mr Seldes’s book is a masterpiece of concision, romping through background accounts of the machinations of the House Committee on Un-American Activities and the collapse of post-war efforts to revive the liberal political philosophies of the New Deal generation. He turns with equally efficient grace to interpretations of Bernstein’s more enigmatic compositions, such as his theatrical setting of the “Mass” and his disillusioned follow-up to “Trouble in Tahiti” with an opera, “A Quiet Place”. The book’s greatest value, however, lies not simply in shedding new and more nuanced light on the story of “Our Lenny”, but in its consistent demonstration—in accordance with Bernstein’s own ideas—that any attempt to separate the musical sphere from the moral and political comes at an unconscionably high price.
Email Post
Labels: classical music politics