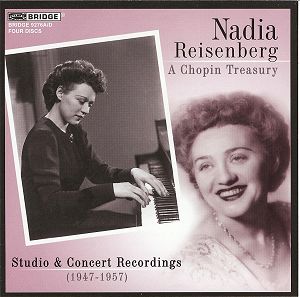 Nadia Reisenberg was a Lithuanian-born pianist whose New York career reached significant heights in the post-war years. She performed regularly with the New York Philharmonic Reisenberg and devoted the larger part of her later career to teaching at the Juilliard and Mannes schools (where Richard Goode was one of her students). She also made a number of recordings with for the Westminster label and it is these which have been re-mastered and reissued as a four CD "Chopin Treasury" by Bridge, together with sleeve notes lovingly compiled by her son (the producer and radio presenter Robert Sherman). A live recording of the third sonata No. 3 joins the Westminster studio recordings of the complete Nocturnes and Mazurkas together with the Op 60 Barcarolle, Op 57 Berceuse and the grand Allegro de Concert thought by Schumann, among others, to be intended for use as part of a projected third concerto.

A fairly strict Chopin interpreter by the standards of her own day, by the standards of ours Reisenberg presents a rare, exemplary balance of deference and individuality. The Nocturnes, recorded in 1956 in the months following the death of her husband, Isaac Sherman, eschew all traces of self-indulgence for a sincerer and more significant quest into the unique poetry of these works. Moments which all too often suffer at the hands of less thoughtful (or perhaps over thoughtful) pianists, such as the reprise of the Op. 27 C-sharp minor Nocturne, or the tricksy opening of the Op 48 F-sharp minor, emerge cleanly, with unforced poignancy and an entirely natural sense of balance.

The Mazurkas are to my ear nigh-on perfect, though the sound quality is less good than in the restoration of the Nocturnes. Lively as you like, the dance rhythms and characteristic hurdy-gurdy drones are neither over-emphasised nor, as so often in the mid century, hidden away like some poor relation of Chopin's more urbane offerings. As for the sonata, heard clearly above the hisses, crackles and coughs of the otherwise well-behaved Carnegie Hall audience, there is no lack of fire in Reisenberg's performance. The scherzo is both breatakingly fast and clear, while the largo, despite being markedly on the slow side, still pulls you into the inner reaches of its expanded poetry with its unrefusable invitation to dance. All in all, though never a household name even at the peak of her career, many households will be much the better off for including this boxed set masterclass in Chopin interpretation.
Email Post
Labels: classical music