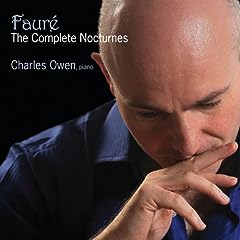 In the space of relatively few recordings, Charles Owen has established himself as a thoughtful and independent voice among the rising generation of British pianists. Previous discs of Poulenc and Janacek, in particular, trod with confidence the narrow (and overgrown) path that divides the original from the merely contrived, leaving us in both cases with interpretations that enriched each composer’s quietly distinct oeuvre for solo piano.

Among other composers whose distinctness requires the epithet “quietly”, Gabriel Fauré is perhaps the quietest. In the solo piano works in particular, the sense of melodic line and harmonic progression are both stretched to breaking point, leaving the performer with an immensely difficult balancing act between the overcrowded and uneventful. But though hard-won, the rewards of a deeply authentic intimacy are there for those few pianists who, like Owen, manage to preserve and penetrate the ambiguity.

The strengths of Owen’s approach are most evident in the larger scale, more ambitious Nocturnes. Formally far removed from the simple tertiary forms on which they are based, these works nonetheless possess a powerful continuity which demands exceptional control of large-scale rhythm from the pianist. Owen’s ability to keep the pressure on, while at the same time commanding sufficient variety and subtlety of touch to allow the nostalgic snatches of melody to escape unchained, as it were, deserves immense respect.

Nor is Owen let down by the quality of the recording, which gives a warm, salon-like acoustic with flashes of brightness in the upper register. The only real problem, in fact, is with some of the lesser Nocturnes, such as the first four, where Owen seems too keen to grind out expression from moments that would not naturally yield it, resulting in over-articulated inner lines and, at times, a plodding feel. But these interpretative factors are, if unsatisfactory in an absolute sense, not without interest, and more than compensated for by Owen’s excellence in the more ambitious pieces.