Friends across the divide 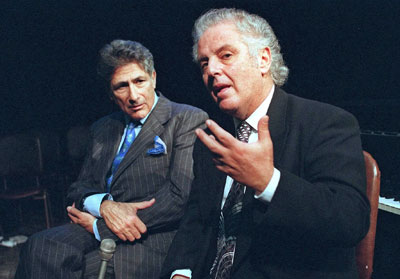 Two thoughtful books, by Daniel Barenboim and Edward Said (seen with the conductor to the fore), explain the often underrated influence of music on society

FOR Plato the art of music was so firmly anchored in moral and political reality that any alteration to the musical system would necessarily require a corresponding political shift. Two and a half millennia later, when classical music is generally seen as a high-class lifestyle accessory, Plato’s conception seems outlandish, even absurd. To be sure, most people involved in classical music today consider their art to be of profound cultural importance, but there are very few who are able to articulate this convincingly.

One such, however, is the Argentine-born, Israeli and Palestinian passport-wielding conductor and pianist Daniel Barenboim. Since founding the West-Eastern Divan Orchestra in 1999 with the late Edward Said, Mr Barenboim’s advocacy for music and music-making as forces for social and political good has grown in prominence and force. Invited to give both the BBC Reith lectures and the Harvard Norton lectures in 2006, he chose the same topic for each—the power of music—and it is from these lectures that the current volume is shaped.

The basic thesis of “Everything is Connected” is simple and powerful. We live in a world in which different voices—different expressions of political will and behavioural norms—collide and compete. Some struggle to be heard; others seem to be continuously present. In music we have the perfect model of contrasting voices working together harmoniously.

The experience of playing music together, or simply listening to it in solitude, can attune human psychology to the experience of balance and co-operation, increasing the depth of our capacity for emotional engagement with others. “How often we think that personal, social and political issues are independent, without influencing each other,” writes Mr Barenboim. “From music we learn that…there are simply no independent elements.”

To some, this analysis of music and society may seem no less far-fetched than Plato’s. But whether discussing the structure of a Mozart finale or the problem of performing Wagner to a Jewish audience, Mr Barenboim proves a wonderfully compelling maestro. He expresses himself simply without being simplistic, and the purposefully slow rhythms of his prose almost command the reader to stop, think and, ultimately, listen.

Mr Barenboim’s thinking owes much to his friendship with Said. As well as working together from opposite sides of the Israeli-Palestinian divide, the two men collaborated across another divide, between performer and critic. For in addition to his higher-profile roles as a professor of English and comparative literature at Columbia University and as a controversial commentator on Middle Eastern and international politics, Said was music critic at America’s foremost left-leaning political weekly, the Nation, from 1986 until his death in 2003.

Compiled chronologically from reviews and essays published in the Nation, and occasionally elsewhere, “Music at the Limits” (which was published at the end of last year in America but has only just come out in Britain) provides an accessible overview of Said’s musings on such matters as Glenn Gould, avoiding orthodoxy in Wagner and, unsurprisingly, Mr Barenboim himself. All the articles exemplify Said’s joined-up attitude to cultural criticism, eschewing detailed evaluations of individual performances for more sweeping assessments of a particular work’s current cultural and social resonances.
A new side to him

Said’s best-known book, “Orientalism” (a provocative account of Western constructions of Middle Eastern identity) was published 30 years ago but continues to be the subject of widespread critical reappraisals. “Music at the Limits” provides a refreshingly new angle on a writer who often seems to disappear behind those who, alternately, lionise or demonise him. From this entertaining if occasionally uneven collection, Said comes over in more informal, personal garb, his writing marked by tremendous enthusiasm and a depth and breadth of insight that is rare among writers on any subject.