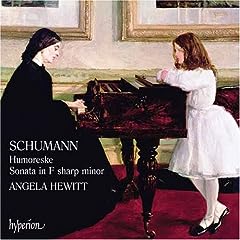 Best known for her modern-instrument mastery of the Baroque repertoire, Angela Hewitt has been pressing forward of late. After beginning to set down the Beethoven sonatas in 2005, we now have a disc of Schumann's Sonata in F sharp minor and the B flat Humoreske, the programme following elements of a Schumann recital given by Hewitt at the Wigmore Hall last year.

Hewitt's Schumann certainly benefits from the pianist's general disposition to rein in her expressive palette, betraying a studied and sensitive understanding of the composer's brand of Romanticism, which consists less in a tendency to explore the raw edge of musical emotion than in a tight control of fragmentary gestures which point beyond themselves. Nonetheless, both Humoreske and Sonata are works full of variation and passion as well as measure and poise, and one was naturally eager to hear this less familiar side of Hewitt's musical personality.

In contrast to her Beethoven recordings, Hewitt allows herself more freedom with the metre and sustaining pedals here, where both works come alive more in the accumulation of surface details than in their occasionally somewhat forced architecture. Predictably, the sonata's witty scherzo, with its range of different 'voices' – the work was signed by Schumann's critical alter-egos Florestan and Eusebius – is handled with a masterful lightness and fluidity of touch, the warm, soft-edged bass of Hewitt's Fazioli instrument (the same one as used in the Beethoven recordings) helping to keep the balance in good trim. But it is in the first movement that the virtues of Hewitt's "conversational" approach come to their most significant fruition, neither the extended lyricism of the slow introduction seeming overblown, nor the clipped gestures of the Allegro vivace lacking in direction.

Though somewhat less successful with the Humoresque, another irrepressibly "conversational" work, fans of Schumann's under-appreciated solo piano oeuvre will find much to enlighten them from an artist whose exploration of new territory is undertaken with great enthusiasm and seriousness.
Email Post
Labels: classical music