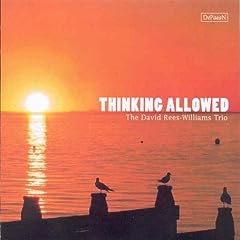 Making music is all about freedom; indeed, for many, it is one of free will's most basic expressions. But freedom in classical music can prove harder to win for its performers than for its listeners and composers, tied as they are to a concept of the musical work as a sacrosanct, printed, text, an idea that took its definitive shape during the 19th century.

Thus, the more palpable freedoms evident in supposedly less serious spheres of musical life are notably lacking. The practice of improvisation is effectively dead in classical music. Both Beethoven and Liszt, in their respective days, were as famous for their improvisations as for the performances of their own and others' works; but now, while many classical musicians can and do improvise, this ability rarely shows itself in the concert hall.

So it was that, in receiving Thinking Allowed, a new recording from the David Rees-Williams Trio - a group that made its name plying improvised jazz renditions of works in the classical repertory - I wondered how to detach myself from my concert hall suspicions about people playing around with combinations of notes that already have perfectly adequate homes, to say the least...
Email Post
Labels: classical music